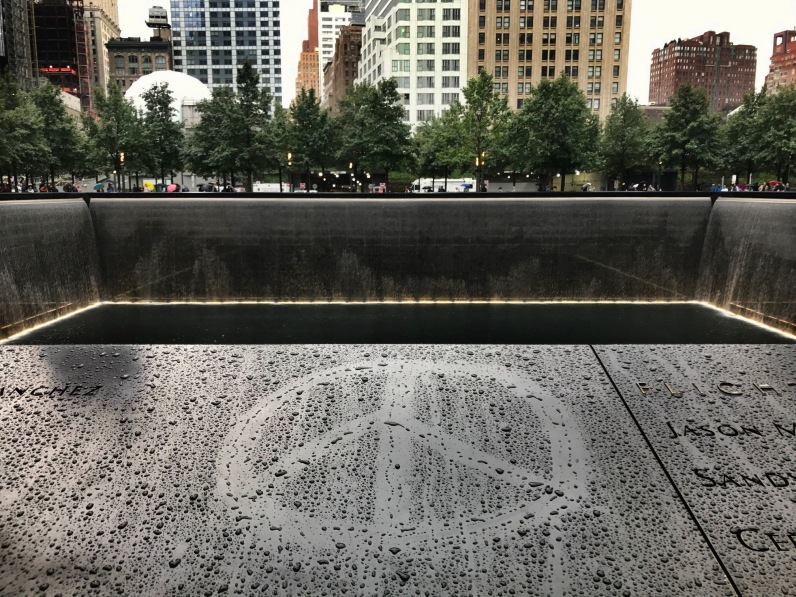 I know two names on the memorial wall.

Their names are two panels apart, on the South Memorial Pool.

Thomas is from the town where I live. Bloomington, Minnesota. My children attended the same high school Thomas did. Our post office is named after him. Thomas E. Burnett Jr. helped force down Flight 93 into an empty  farm field in Pennsylvania so that it couldn’t crash into another public place.

Mohammad (his mom called him Salman) grew up in Brooklyn. His parents were from Pakistan and he attended a Catholic school. Salman was an EMT and an NYPD cadet. When he saw what was happening on that day seventeen years ago, he went to the towers to help. After the towers fell, his parents couldn’t find him. Nobody could. Because he was Muslim, the authorities thought he was a part of the plot. But six months later recover workers found his body in the rubble. EMT bag by his side.

Both men are heroes. Both sacrificed their lives to help others. And now their names are carved in metal just 20 feet apart.

I’ve never met either man, but I know their names. Thomas is a part of Bloomington lore. Salman is the son of Talat Hamdani, and she told me his story sitting around their dining room table.

As you walk around the memorial at Ground Zero, you’ll find roses tucked into some of the names that are cut into the metal plates. I was there last night, on 9/10 (it is closed to the public on 9/11 for family services) and perhaps because of the date, there were more flowers there than I have seen in the past.

I walked the perimeter of both towers…there are names and more names…every panel is covered.

On the South Memorial Pool, there is a small gap. At the end of the names listed for those who died in the World Trade Center, and just before the listing of those who died on Flight 93…there is a blank space on the metal surface.

I stood in front of each name, then in front of that blank space in between. It was raining. The water drops beaded up on the metal surface until they couldn’t hold together, then ran down between the letters.

I’m not sure why, but I wiped a peace sign into the blank part on the memorial. I just wiped away the water drops. It didn’t last long. The rain washed it away again.

Maybe it was a prayer. Maybe a hope…that our pain could wash away, too. Never forget…but work toward healing. Maybe it was just a prayer for healing.

The rain kept coming down. Each name shined as the darkness fell. People walked by, quietly, taking pictures, tracing the names with their fingers. Security officers walked the perimeter and  watched the crowd for risk. Roses were tucked into names.

Sometimes you don’t have answers. 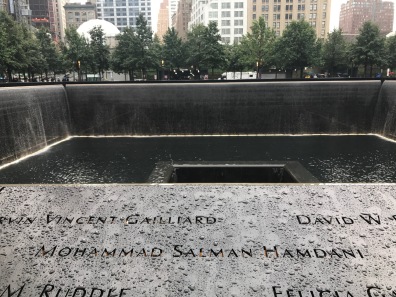 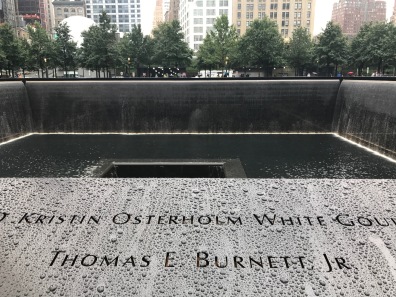