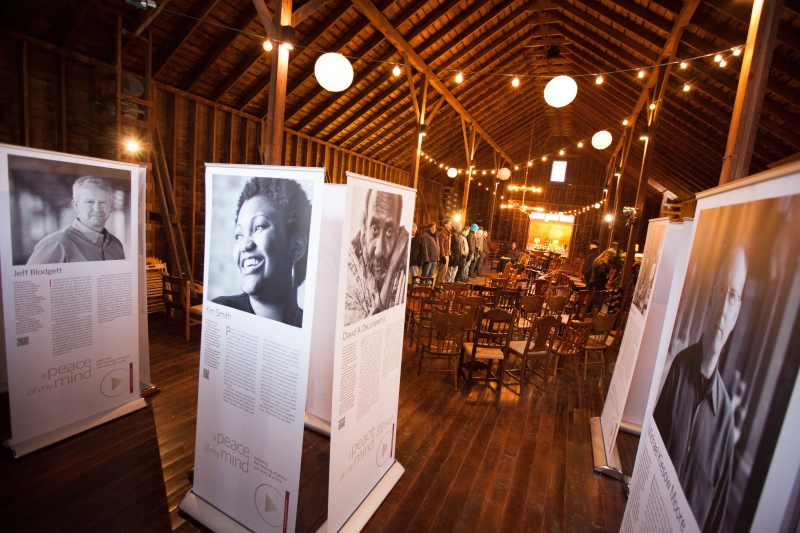 With a few days notice, we had the chance to install our exhibit at Everwood Farmstead  in Western Wisconsin last weekend. Their stunning historic barn is home to occasional events built around music, theater and storytelling.

On Saturday evening they hosted a unique performance of Theater Latte Da’s  production, “All is Calm.”

The play is based on the true story of the Christmas Truce of 1914. World War One was new. Many of the soldiers were, too. The Pope suggested a truce for the holy day and the armies obliged.

The trenches of German and Allied soldiers were near one another and Christmas carols could be heard drifting over the battlefield between them. They two sides joined one another and eventually came out of their trenches to enjoy one another’s company.

At first, not trusting the other side, they were cautious. But slowly they laid down their arms and came together to share food and drink, story and song. They exchanged family photos, brotherhood, and home addresses before the evening was done.

Our exhibit was displayed around the edges of the barn, supporting the theme that stories can reveal the humanity of even our greatest adversaries. The audience explored the exhibit before and after the performance, reading stories and asking questions.

The barn at Everwood Farmstead is unheated. The actors and audience were bundled against the cold night air, their breath hanging in the air. The story that unfolded on the stage…on the battlefield…seemed raw and close as the soldiers and the audience both tried to stay warm.

As the story draws to an end, the soldiers return to their trenches. The men who were friends the night before become enemies again. The gunfire returned and the war ground on.

The military officers threatened to punishment any soldier who would dare to talk with the enemy again. You can’t run a war when the two sides are friends. It’s much easier to leave them nameless and faceless. It’s too difficult to fight an adversary when it turns out you like them…when it turns out they are not so different than you.

These are the words of war.